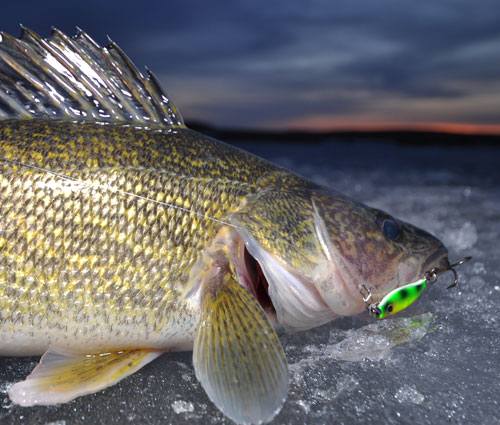 When a fish hits a bladebait, she'll try to rip the rod from your hand!  Even when you have 34-degree temperature, when walleye can only be caught on a jig with a stinger hook, they will still hit a bladebait with reckless abandon.

While the trend on new lures is to soften them up, scent them up and adapt them to make the fish hold on longer, none of this applies to a bladebait.

A bladebait is a flat metal spoon with weighted nose that vibrates on the retrieve and vibrates on the lift.  Bladebaits are fairly heavy for their size, so they cast like bullets and get down to the fish zone fast.

Bladebaits are also the best bait for walleye out there. Our favorite bladebait is B-Fish-N Tackles B3 Bladebait.

Vibration, color and size are what make the B3 Bladebait tick!

B-Fish-N Tackle makes the best blade baits on the market. Their B3 Blade bait is a sonar blade style in very hot colors, with chip proof paint.  The hooks are premium and very strong.  The eyes are glass and show up even in stained water.

Available in two sizes 1⁄4 and 1⁄2 ounce, the B3 will attract walleye, white bass, smallmouth, northern and muskie.

Why we love the B Fish'n B3 Bladebait

These blades are balanced out of the box and put out a ton of noisy vibration when retrieved or better yet, vertically jigged.  In fact our favorite way to fish them is with a 6-1/2 foot medium action bait-casting rod, which gives excellent control.  You’ll want to lower the B3-Blade to the bottom, rip it up about a foot and then let it flutter back down until it clinks the rocks.  Keep ripping until they start hitting.

Sometimes power ripping doesn’t always work.  If a few minutes pass, instead of rippin’ hard, slowly lift the rod tip so that you just barely feel the vibration.  Vary your jigging motions between easy and fast until you find the action the fish like best.

The B3 Bladebait can be vertically ripped or cast and retrieved.  We’ve found that on the cast we will catch all species, but if we want walleye or their cousin the sauger, vertically ripping is the key.

Dams are great spots to use the B3 Bladebait.  Walleye, sauger and white bass will all make a migration to the dam and they become vulnerable to B3 Bladebaits cast up to the dam.  Most fish will hit on the first few cranks of your reel, so be ready to set the hook.  A slow retrieve just fast enough to keep the blade vibrating works well.

If the fish aren’t pushed up to the dam, look to the first few downstream holes, which are usually found in the bends of the river.  Rip these deeper spots and you’ll be surprised that the blade will not only catch numbers of fish, but big ones too!

Bladebaits on the Ice

But don’t think that the B3 Bladebait is for rivers only.  In fact we catch some really big fish all year long on B3’s.  As soon as ice is out northern pike and smallmouth bass really get attracted to the flash and vibration of the B3.  Rocky shorelines and sandy flats are early season hot spots.

Cast the B3 right up to shore and bring it back with a steady retrieve, slow enough to keep it tight to bottom.  If pike are dominant, add a stainless steel leader. If muskies are around, they will hit the B3 also.  Muskie will key in on smaller baits in spring and a 1⁄2 ounce B3 is hot muskie bait!

Smallmouth bass, northern and muskie will often follow a B3 without hitting, so as the lure gets near the boat you can follow it up with a figure eight at boatside, which often works for muskie. If you see smallies or northern follow, drop the lure back down give it a few rips under the boat and hang on.  That switch in action will entice a ferocious strike!

B3 Bladebaits should be in every anglers tackle box whether you are after walleye and white bass in early season on your favorite river or if you head to your favorite lake at ice out.  If you try a few of these techniques it could open up a new world of angling for you. You'll be catching walleye in no time with one of the best walleye fishing lures out there.