Fassbind and Smyers Extract Winning Fish Like Needles from Haystacks

“There were a few times when I thought I might take an auger to the foot. Like close quarters combat,” says Custom Jigs & Spins pro staffer and competitive ice angler Kevin Fassbind.

But the Wisconsin duo of Fassbind and partner Nick Smyers were excited to kick off the 2013 North American Ice Fishing Championship (NAIFC) after a second place Team of the Year finish in 2012. 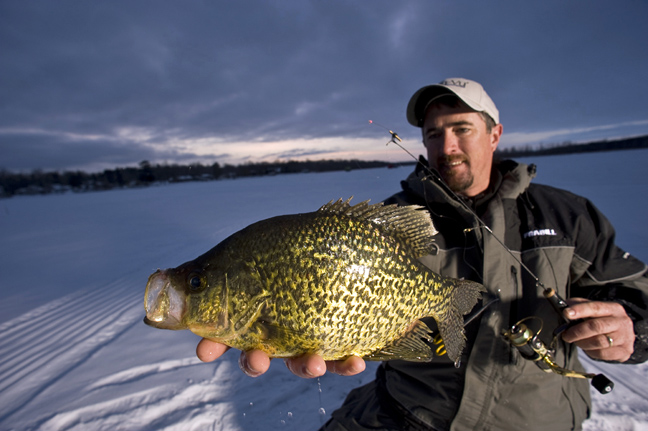 Day One saw the tournament field limited to Waukon Bay, each team in search of eight crappies and eight bluegills. “At one point I was standing in six inches of water on top of the ice,” said Wisconsin-based ice ace Kevin Fassbind. “But we found some good ‘gills and ended up in 11th place going into Sunday. At that point we were only a pound out of second place so we knew we still had a chance.”

Day Two brought competitors to Isle Bay for eight crappies and eight perch. The conditions were no better, and teams fought slush to find veritable needles in a haystack. “Scouting with Humminbird Side Imaging in open water and running the Aqua-Vu Micro cams last week told us only very specific kinds of weed clumps held fish. But it’s fickle. They’re there one day and not another,” said Fassbind.

Turns out almost every crappie caught during the tournament on Day Two came out of two bathtub-sized spots. One was Fassbind and Smyers’ stake, the other the claim of gold-miner Tony Boshold, fellow St. Croix pro staffer.

With 75 teams dangling baits of all shapes, sizes and description, via long rod, palm rod, Straight Line, tight line, and every permutation in between, this particularly tough bite proved a good example of how precise location and presentation can quickly determine heroes and goats.

“Historically, my confidence bait is a 3- or 4-millimeter Custom Jigs & Spins Tungsten Chekai. For this tournament it was the 3 mil with a pink Finesse Plastics body. I bit it in half and fished it on 2-pound fluoro.” 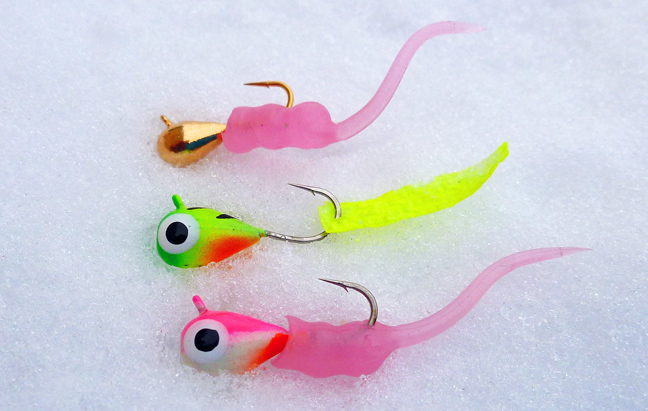 “The whole finesse thing can be a Catch 22. Mille Lacs crappies can spit out a bait faster than you can read a spring bobber a lot of times, so unless you’re sight fishing, the smaller you go in bait size the more difficult it gets. But go too big and they won’t touch it. The size 16 (3mm) Chekai was just right.”

“At one point we were completely surrounded so I held guard while Nick moved around trying to find other fish. When the action slowed we left to get on our perch spot to fill out our bag.”

Good decision. Partner Nick Smyers quickly punctured perch with metal—a 4.5mm firetiger jig double-hooked with a segment of Uncle Josh Meat cut from a two-inch chartreuse leech pattern. “The Chekai has the drop speed I need to fish fast and the hook quality is super good. My hook-up percentage is definitely higher than other jigs. Add the Uncle Josh pork fat, which stays on the hook, and I’m never touching the combo to re-bait. It’s all about pulling fish, which we were able to do when it mattered,” reported Smyers.

Fassbind added: “But we almost didn’t make it to weigh-in. Nick’s ATV got clogged up with ice and snow and tires were hanging in the air when we tried to move. So, we left his wheeler behind and I dragged him into the weigh-in in the Frabill sled!”

All said and done, the team placed second out of seventy-five teams.

“Although this was a really tough bite, we look forward the next NAIFC events, including another qualifying event back here at Mille Lacs in March. There are some really good fish here, you just have to find them.” 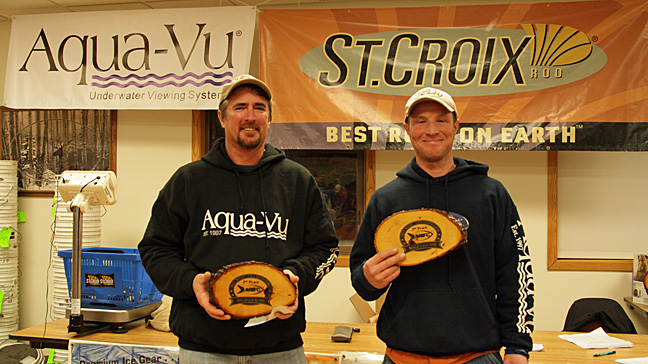