Lake Winnipeg, Manitoba (January 9, 2014) – Serious hardwater walleye hunters love Lake Winnipeg for its consistent trophy potential. If 10-plus-pound ‘eyes through the ice are what you’re after, it’s the place.

“Winnipeg spoils you so much that you won’t want to fish walleyes anywhere else. It’s got size andnumbers. Plus, they bite all day, not just during narrow low-light feeding windows,” says Custom Jigs & Spins pro staffer Chris Bressler, who spent the latter half of the holiday season chasing the lake’s famed “greenbacks.” 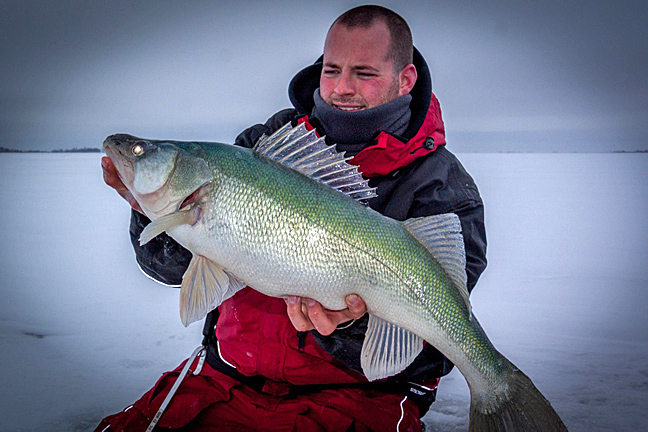 But the expansive 9,500 square mile lake demands respect. “Although we were only a half-mile from shore, we were eight miles from the launch. And it was the roughest snow I’ve ever seen, like concrete. It’ll beat up a snowmobile pretty good. Add extreme cold to the mix and it’s no place to experiment with your gear.”

He says that if you’re not 100% set up for extreme winter conditions, hire a guide. “It’s not forgiving. If you don’t have tracks, it can be near impossible. Even with a good machine, the lake will try to bust up everything you’ve got.”

Only years after fishing with guides and networking with in-the-know sticks like fellow CJS prostaffer, Loren Keizer, does Bressler say they’ve learned how to prepare and mobilize with a near failure-proof system on their own. For example, each of the crew’s snowmobiles is outfitted with a Humminbird 597ci with GPS digital mapping to ensure accurate and safe travel to their spots and back to the shore at day’s end.

Bressler also stresses proper winter wear, as his crew stays extremely mobile. “We don’t carry portable fish houses. We’re always moving and popping holes. I wear my fishhouse. My Frabill FXE Snosuit jacket and bibs is going on four years strong. A good suit and mittens is the key to having a good experience up here.”

But even if your gear is in tip-top shape, locating the roaming fish is the rub. Then, once found, it’s keeping the greenbacks’ interest before the fish move on in their endless search of more food – in the case of Lake Winnipeg, massive schools of baitfish, that include emerald shiners, rainbow smelt, cisco and perch. It can be a one fish here, two fish there proposition. And sometimes complete blanks on spots. But the payoff keeps them on the move. 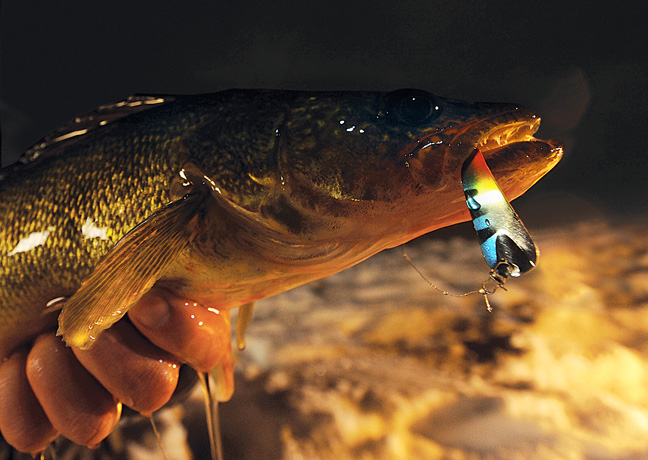 Bucking the proven trend, Bressler and company have switched from the tried-and-true rattle bait, which first gained popularity on Winnipeg.

“I don’t use any rattle baits at all. We’ve found flutter spoons catch just as many, if not more, fish. And if the fish are the least bit tightlipped, Pro Series Slender Spoons are where it’s at.”

He says it was last March that they switched over from rattle baits to ¼-ounce Custom Jigs & Spins Slender Spoons. “Now this year we’ve had even more success with the new finishes in the Pro Series Slender Spoon line. I like to wrap a salted shiner in a circle around the treble hook to add scent to the equation.”

Dealing with temperatures that fluctuated from 25 degrees to -60 with windchill during the tail end of 2013, Bressler says he learned just how effective the baits could be. “If you missed the first bite and lost your meat, the fish would come back and whack it a second time --  even during the extreme cold, which was surprising.”

He says they were shorebound on the coldest day, but did fish through the -25 degree mark.

Concentrating their efforts in 10-12 feet of water, Bressler says they marked a lot of baitfish high, just four feet under the ice, but the majority of their walleyes were caught within a foot of the bottom.

“When the weather was good, it was all about a few big rips and series of shakes. As the temperature dropped it was all shaking, no rips.” Each guy popping three or four holes a piece, he says they didn’t fish any area longer than 15 to 20 minutes.

“We kind of lucked out. We’d fished the general area before, but that first set of holes was good, thanks in part to saved waypoints on our Humminbirds. My first fish was a 27-inch walleye, which hit on the drop. Our second fish was 29 inches and all of 11 pounds on the digital scale! Winnipeg walleyes are extremely heavy for their length.”

Later in the trip, Bressler’s father-in-law iced another sag-bellied 30-inch fish, which weighed a massive 11.52 pounds, taking tops for the crew.

“Textbook thinking has it that gold-based baits excel on cloudy days and nickel or silver on bright days, but we caught equal numbers of fish on both when it was cloudy. I had my best luck on a Pro Series Slender Spoon in Nickel/Electric Perch, which has a blue tinge to it. My father-in-law was fishing the Gold/Pink Tiger, both in ¼ ounce.”

Bressler’s set-up comprises Thorne Bros. and Frabill sticks, the latter in a 36-inch medium-heavy. For most situations, Bressler’s spooled up with 8-pound PowerPro; for extreme cold, 8-pound Berkley NanoFil. He runs an 8-pound P-Line fluoro leader connected with a small barrel swivel between the spoon and his main line. 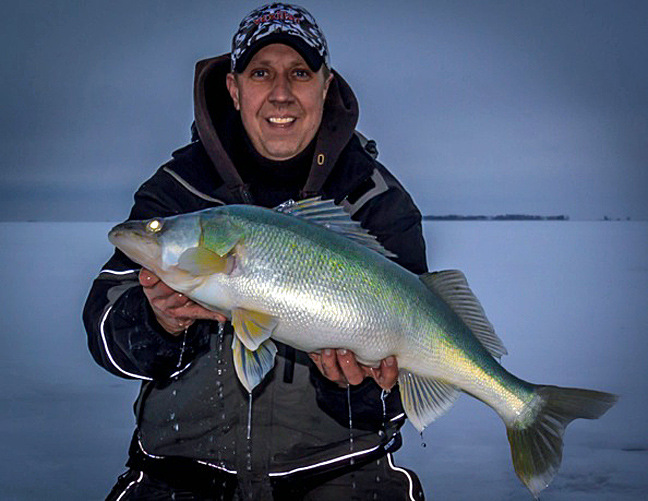