Custom Jigs & Spins’ historic Rat Finkee made a name for itself in the ‘70s; still dominates today

Coralville, IA (November 19, 2013) – What’s in a name? Everything. Just ponder all the products we use today whose names represent the category itself.

Nick your finger with a fillet knife and you call for a Band-Aid – not “the category leader in adhesive bandages.” After a cold day on the lake, rather than wipe your rosy-red schnoz on your sleeve, you grab a ‘Kleenex,’ even though the subpar tissue might actually be flesh-grating material from a nameless box.

Now, reach in your tackle box and grab a Rat Finkee, the original – there’s gotta be one in there. Its distinct, oblong head and soft-bodied hook shank are telltales. In fact, Custom Jigs & Spins’ Rat Finkee was one of the first soft-bodied lures on the ice.

That’s right, Custom Jigs and Spins’ Rat Finkee was at the forefront of the soft-plastic revolution. Many have made the effort to duplicate it, but none have done the design justice.

So when someone says, “please pass the Rat Finkee,” don’t offer them a knockoff.

The storied jig still sports the same soft-body style and razor-sharp gold hook since its debut in the late 1970s. When tied with a knot that synchs tightly to the eyelet, the Rat Finkee sits faultlessly horizontal due to its perfect balance; this equilibrium also allows the jig to turn head-on into the current, just like actual forage fish.

And best of all, fish still can’t resist eating it.

“I’ve been tying on Rat Finkees since I was a kid, and it’s still one of the first jigs I use every time out on the ice; especially when I’m hole-hopping and looking for aggressive fish,” says Russ Maddin, fishing guide and ice-fishing extraordinaire who resides in Michigan’s northwest Lower Peninsula. “When a fish grabs a Rat Finkee, they hang on because of the soft body. That increases my catch during days when the weather’s not in my favor and winter’s winds are making it hard to detect strikes.”

But the Rat Finkee is more than just another tiny jig for shallow water applications. Because of the many sizes available, it’s one of the most versatile multi-species, fish-attracting lures in the tackle box.

There’s the tiny size-12 and 10’s, which idyllically imitate the miniscule invertebrates fish gobble up. If, by chance, genuine scent is needed to attract strikes, then just nip a single maggot and let nature take its course.

Tie on a size-8 or 6 Rat Finkee and poke a minnow through its lips with the wide-gap hook and catch crappie and perch in 20 to 30-feet of water. And then there’s the size-4, an absolute no-brainer for using with a frisky minnow while deadsticking or up off the bottom with a stationary tip-up. Walleyes, trout and jumbo perch beware!

There’s a Rat Finkee made for every water clarity condition imaginable, too – 21 different color schemes, including four special “Glow Bright” colors that illuminate the waterways in low- and no-light conditions.

Time tested. Mother Nature approved. Tie on a Rat Finkee and reap the rewards of the original. 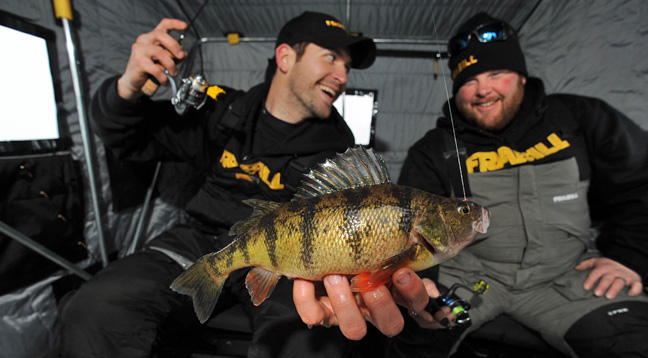