We moved more towards the weed edge, and sure enough the crappie appeared suspended up on the Marcum locator face. If we lowered our jigs to right above the suspended fish, we started to catch a few. We had made the switch to larger sized jigs (since crappie have bigger mouths).
By 10 p.m. we had caught enough. We had one of our more successful days/nights on the ice.

By nature Poppee and I prefer ice fishing in shallow water. But when the fish are biting in deep water in the middle of winter, then that's where we will go. Let's take a look at some of our gear and how we use it for deepwater panfishing.

First and foremost a good electronic unit is your best friend. Fishing without one is like fishing naked and no one wants to get caught naked on the ice!

We like the Marcum  color flashers/GPS combo units. These units are not toys! But rather, they are precision instruments that make everyone a better fisherman and make ice fishing five times more fun! We'll sethem up in Ice fishing mode as well.

When you put the Marcum transducer in the hole, the locator face will light up, showing the bottom and whether fish are suspended in the water column. These units are so high powered that you can see a 1/200th ounce jig one inch off bottom! As you lower your jig down the hole, you watch the locator and you will see a thin band moving down; just like a second hand on a watch. Fish will appear as larger sized band in green, yellow and red. When the two bands meet up, your rod will usually bend over!

In our case when the bluegill were feeding we needed a small compact jig that would get down to the "fish zone" quickly. We chose Custom Jigs & Spins 'Gill Pills, because they had a heavy head and the hook rides up a 45 degree angle, which makes for easy hook-sets in deep water which in our case was 32 feet.

Another problem you face when fishing deep water for panfish, is line coiling and twisting. We chose 1-1/2-pound test. We were fishing in ultra-clear water and this line is barely visible, plus it is thin and hardly coils.

Our poles have very sensitive springs built right in and have a nice limber action. You'll want to set the hook hard and then hang-on, as your rod will be bent over double!

After the sun had set and we switched over to crappie we used the same rod and line combos, but switched over from size 14 to the size 10 'Gill Pill's in Red Glow. We tipped these jigs with several large waxworms. It was such a big and bulky combo that we had to turn the gain down on our Marcum flashers. We also made sure to charge them up with a flash from a CJS purple UV Nuclear Flash. The flash from this light really makes a difference. The UV will make these lures glow super bright. 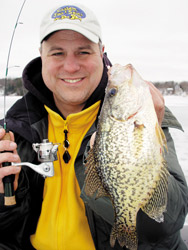 In most of the bodies of water we've ever fished, we've found crappie to suspend. In this case they tended to suspend from 15 to 25 feet. Every fish we caught was first seen on the Marcum flasher. We would lower our 'Gill Pills to right above the fish we saw and then slowly jiggle and rise to the jigs to get the crappie hit.

At first a few crappie came in, then after about an hour, the action was fast and furious. The peak ended after about 45 minutes and thinned out.

The lake we were fishing was weedy and ultra-clear. It had two deep bowl-shaped areas that ran down to 40 feet. By mid-winter the bluegill had moved deep and could be caught throughout the day, but the best action appeared at dawn and right up until dusk. The crappie must have buried themselves into the weeds during the day, but when the sun set, they would move out to the deep weed edge where they became vulnerable.

Don't sing the blues when mid winter comes and don't fish naked either! Get yourself the proper gear and you'll be a better fisherman for it.