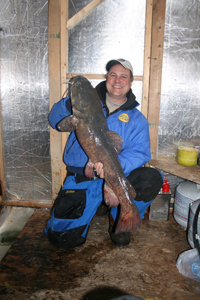 We were just setting everything up and getting ready to fish and we knew we had to move. My buddy, Cowboy Kevin, had his permanent shack out in Pistakee Bay and he hadn’t caught many bluegill in the past few days. We decided to try this spot for about an hour and then move. Moving would be difficult since the shack was frozen solid into the ice and it was just the two of us and one ATV with the wind blowing about 40 mph!

I lowered my jig, a size 8 Custom Jigs & Spins Diamond jig to bottom and raised it up a little. I checked my line; the two pound test still seemed good and the drag on my Frabill reel was set just right. I was using a new prototype Frabill ice rod that Poppee and I had designed and had caught about eight hundred bluegill on it in the past week, so the action was just right!

The rod went into a holder attached to my bucket. I lowered my camera down the hole so I could find the jig and see the action. It went to bottom and I searched for my jig. I couldn’t see anything except a large brown rock. "This is one heck of a rock pile, Kevin." "There’s no rocks here" Kevin replied. "Well then what is this?" We both peered into the video screen. "It looks like a giant turtle" "No, It’s a giant sea otter" "No, wait I think it’s a catfish!" "Wow look at the size of her"

And then my reel started squealing!

There was not much I could do except hang on. All the line ran out of the reel and I was in trouble. I pulled and reeled and a little line came back. Slowly I kept reeling and pumping. Kevin cleared the area. He opened the door and threw everything that could possibly get in our way out the door. Most of it blew away, since the wind was blowing 40 mph. But we didn’t care, we’d find it later.

Suddenly there was the fish. Kevin had the gaff and was ready. She swam by like a slow, fat ballet dancer would, had she been a catfish. Then she was gone into the murky depths of Pistakee Bay. After a while, I got her up to the hole again, she winked at us and then swam away. She was gone for the moment, but ten more minutes of reeling and pumping and was back dancing under the hole. She was dancing a belly dance, she was mocking us! There wasn’t anything I could do but hang on and hope that my gear wouldn’t fail me.

Kevin had ditched the gaff and grabbed the camera. I didn’t plan to lose the fish, but the fish might have other ideas. So at least we could get a picture of something.

I went back to reeling. The line was scraping the edge of the hole and the fish was maybe a foot or two under the ice, twenty or thirty feet away. The next thing I knew, there she was right at the hole. I lifted and miraculously her head came out of the water. I threw down the rod and stuck both hands in her lower jaw and pulled. 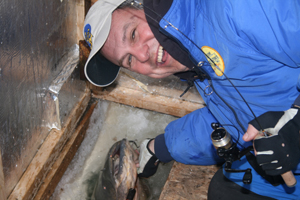 Then she got stuck in the hole!

It was a twelve inch hole and the big flathead was stuck! I pulled a little harder and she somehow squeezed free and was lying on the floor. The fat ballet dancer looked more graceful in the water. She was big, heavy and ugly, really big, really heavy and really, really ugly.

I held her up for a few pictures and then measured her to be 38" long with a 36" girth. Before dropping her back down the hole we chipped the hole a little larger with the spud bar, we dropped her down, head first and saw her swim away!

I looked at that little Frabill rod. It was amazing that it held up to that monster fish that weighed over thirty pounds. The line was a twisted mess that somehow didn’t break and that tiny Diamond jig that had been stuck in the flatheads upper lip had it’s hook completely straightened out.

It turned out to be a world record!

That’s right, I registered it with the Freshwater Fishing Hall of Fame in Hayward Wisconsin as an ice fishing release and it turned out to be a world record. I also registered it with In-Fisherman for a Master Angler award, just for the heck of it. 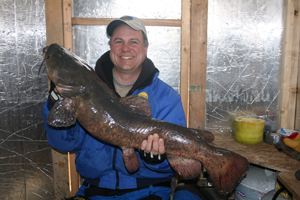 Now I’ve caught some big bass while ice fishing. Bass of five pounds on two pound test before, but never, ever anything like that monster catfish. When you hook into something huge, you better have a good drag on your reel, a pole that will bend and not break and a lotta luck on your side.

So after all the craziness of catching that big fish was over, what do you think we did? We moved the shack of course. In fact we moved it to a perfect spot and loaded up on the big bluegill just as the sun was starting to set. It was the best day of the ice season!

If you enjoyed his article, you may also like: