What if you absolutely had to catch your daily bag limit of fish every time you hit the ice? What jig would you use? What fishing techniques would you apply? Well, here are three pros employing their favorite techniques to catch more fish!

Kevin Fassbind is one of the top anglers on the NAIFC tournament trail. Along with his partner Nick Smyers, they have won or placed in the top 5 in just about every event they have entered in the past dozen years.

Kevin's approach is simple and straightforward when he is after bluegill. He studies a map, drills some holes in a likely area and then the work starts. He'll spend hours upon hours watching the Aqua-Vue camera and how the fish relate to it the underwater world before he begins fishing.

Once he figures where the fish are working he raises or lowers the camera to fish level, this is a critical step. He then walks the camera back out of the hole and lays it on the ice. Now he sets his fishing line to the exact length of the camera cable, by stretching it out next to the cable.

This may seem like a silly approach, but you see, most of the time Kevin doesn't use a locator to fish with. A locator just slows you down as does sitting on a bucket. If you are trying to outfish everyone around you, depth and how fast you get to that depth are paramount.

He employs two rods that are identical. They are four feet long fly rod blanks with a ballpoint pen spring bobber. The line from his fly reel goes through a hole in the side and out blanks tip. With this magic wand, he can make his jig dance and entice.

Kevin doesn't use a locator as they can slow him down or mess up his cadence. He'll fish a hole for 5 minutes before moving on.

His fishing gear includes his favorite tungsten jigs. The Custom Jigs & Spins Majmun and Chekai are his favorites. His confidence color is purple. The Majmun comes in a solid purple, but the Chekai doesn't so he applies purple nail polish over a gold one to get just the right shade he wants.

Bait is just one double hooked red spike! Speed and tungsten go hand in hand. Tungsten gets you into the fish zone, quickly! (Personally, my favorite Chekai jig color for bluegill is purple/glow...but I'm not Kevin).

On a recent trip to the Madison Chain, I watched Kevin in action. He drilled his holes, looked through the camera for fish and was on the move. Meanwhile, I got set up, put in my flasher, sat on my bucket and soon had a 10 fish lead on the boys out of my magic hole.

Once he began to fish, he quickly caught up easily surpassing me by at least 50 fish by the end of four hours. I caught fish and had fun, but he really, really caught some fish!

Jesse Quale runs Green Water Walleye guide service out of the Petenwell and Castle Rock Flowages. These are huge bodies of water with great populations of walleye, crappie, and white bass. He'll guide groups from two anglers to a few dozen and he always gets fish.

Jesse focuses on river channels and flats near the channels that have wood. These areas hold game fish all winter.

While Jesse supplies anglers with all the tackle they need including graphite rods and locators, some guys just don't have the knack to jig them up. Since each angler is allowed three lines...out come the tip-downs. 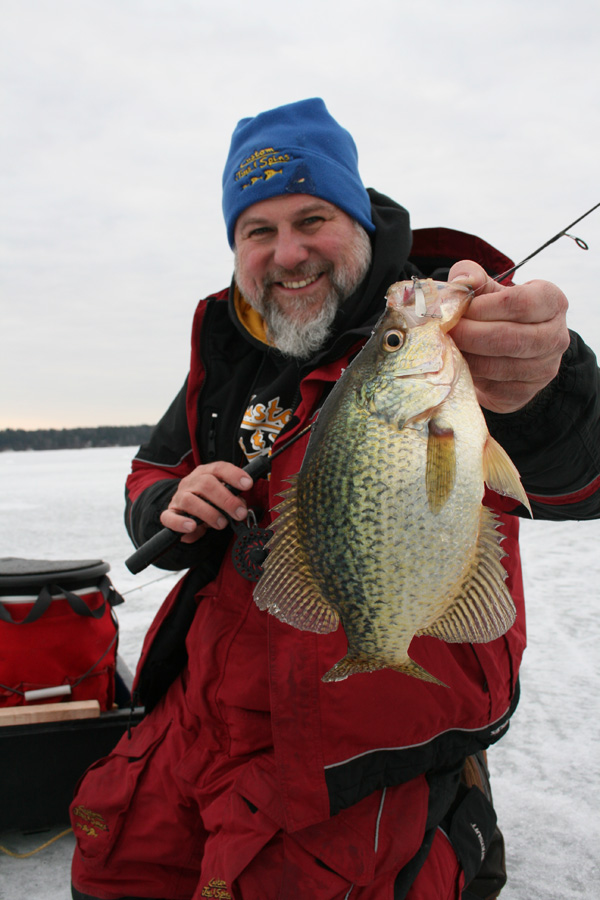 Tip-downs are a quick and easy way to present a live minnow to a light biting fish! A tip-down consists of a stand that holds a lightweight pole mounted on a pivot. When a fish grabs the minnow the rod tip drops down and the fish runs with the bait. The angler grabs the pole, sets the hook and the battle is on.

Jesse has been on the ice where he has guided a dozen anglers with 36 tip-downs set! Let me tell you that when the fish move in, the tip-downs drop quickly and guys are running all over the place snatching up the fish! Everyone goes home happy with the maximum number of fish caught.

When I'm on a crappie bite and looking for enough for the family fish fry, I like two use dead-sticks to up my ante. Whether I'm in Iowa, Illinois or Wisconsin, I can use three rods so I'll jig with one rod and employ two dead-sticks.

I'll jig with an attractor spoon like the Custom Jigs & Spins Slender Spoon or the Demon Jigging Spoon. Top colors are any pattern that glows. I'll use the spoon bare, with a few spikes or a minnow head. I'll use aggressive jigging motions to attract the fish into my area.

If they don't attack my spoon, they may snatch a minnow on the deadstick. My deadstick rods are fiberglass noodles. They are set in rod holders attached to buckets close by where I am fishing, where I can see them at all times.

I'll put size 6 Demon jigs in glow finishes on dead-sticks, charge them with a flash and fin hook a minnow. It's like a binky to a baby!

Well, there you go. Here are a few ideas to help you catch your limit of fish every time you go out on the ice. Give these techniques a try and you may just fill your bucket up for a nice fish fry, too!