Winter has come and there is nothing as exciting as the rush I get from my first expedition on early ice. That first step on the ice is the beginning of a great new season with endless opportunities on the hard water. One small step for Walt, one giant leap for new innovations!

Because you see, I am always tinkering with new ice gadgets, new lure styles, lure colors and ideas in general that make it easier to catch more fish on the ice. 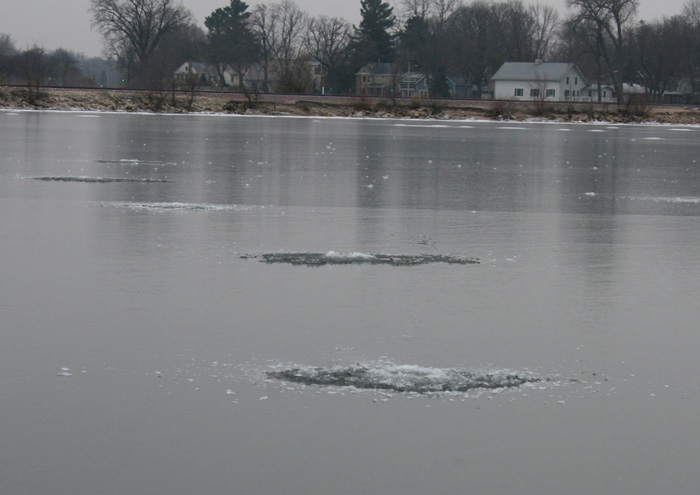 With a quick, hard freeze I’ll go for it on three inches of ice and take that first step. Thankfully I’ve never fallen through the surface, probably because I always bring along my trusty, rusty 30 year old spud bar. In case you don’t have one...you need one. A spud bar is a long metal chisel that you bang into the ice to see if it is safe enough to walk on.

The technique that has worked for me is to take the bar and slam the ice ahead of where I intend to step, and then keep slamming all the way out to the spot. Be sure to have a rope attached to the bars end and slip it on to your wrist so that if the bar blows through...it doesn’t shoot through a thin spot and disappear. Should you encounter thin ice ...back away slowly to a safe area and change your long johns.

Channels, backwaters and sloughs will freeze first. A sheltered channel will freeze quicker than you’d imagine, sometimes freezing up several weeks or a month sooner than the main lake. I’ve fished Thanksgiving in some protected channels, before the lakes froze up much later in January.

While many anglers preach about taking minimal gear along with them, I prefer to drag the sled filled with all the essentials I’ll be needing, maybe 50 pounds of gear at the most.

No matter how shallow I’m fishing, I take along a flasher/GPS because it allows me to check depths, mark fish, and save spots. I like to watch in real time as the fish follow my jig, as opposed to fishing blindly and hoping.

A back saver for me is my electric auger. I’m too old to drill ten holes with a hand auger. The electric auger can drill 50 holes in a day on the ice. Often, I’ll drill holes for other anglers because ice fishing is a sport of camaraderie, not selfishness.

I round out my gear with a flotation suit, ice picks, scooper, shallow water rods, a pile of jigs, some bait, and a bucket. I’ve got the sled set up where I can move it to the hole, fish from the bucket, and see the locator, switch rods and jigs without pulling everything out.

Strategies for finding a hot spot

Early season spots I normally fish will hold panfish like bluegill, crappie, walleye, perch, and white bass, depending on what the area has to offer. My preferred specie is bluegill. It’s feisty, tasty and sometimes a challenge to catch, so you’ll need a good supply of tackle to tempt them.

While fallen trees and piers are easy to see, hot spots, more often than not, can be less obvious. Over the years, I’ve developed my own strategies for finding the places.

I find the majority of fish out in the center of the channel where subtle bottom changes seem to make a difference. That’s when the locator comes in handy. If I’m in a four foot deep channel and all the sudden come up to a five foot area...that’s a spot to fish. Conversely, If I’m in that same channel that has silted up to only two foot, I’m outta there!

Backwaters are a whole different deal altogether. You have to test for thin ice with the spud bar constantly, since current can mean thin ice that you can't see. Plus fluctuating water levels can make or kill a hotspot.

I’ve been in some back channels where it gets down to 12 feet of water. In these areas, the fish will push shallow early in the morning, and then move deeper as the day progresses. Big fish like to hang around the deep fallen trees.

I’ve had a lot of success with the Nuclear Ant tipped with a waxworm or two. The CJ&S  Nuclear Ant is unique in that it has Finesse Plastic legs that undulate and a long shank hook that will hold a lot of bait. By “bugging up” the ant, it will flutter on the fall...tempting those sneaky bluegill.

Tungsten lures are all the rage and I have a variety of them including the NEW Custom Jigs & Spins  Wolfinkee. The size 10 is great for shallow water when tipped with a few red spikes. The Wolfinkee is basically a tungsten version of the Ratfinkee, but in crazy tempting to the fish colors and a tungsten head that makes it nearly twice the weight of the lead Ratfinkee.

Match the jig color to the water 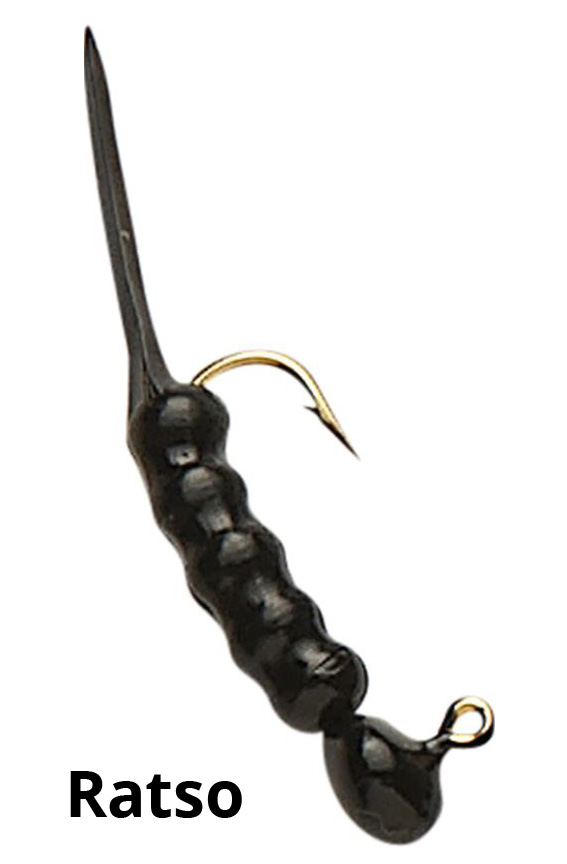 The water clarity of these early season areas will also make a big difference to your fishing approach. I have fished in ultra clear water to water with six inch visibility. In that clear stuff, the more natural, tiny presentations work . Darker colors, red spikes and tiny tungsten is the rule. 3mm/#16 hook Chekai and #12 Glazba Tungsten jigs will fire up the fish.

Most panfish can be caught near the bottom of the water column, but crappie seem to suspend and often can be right under the ice. A long jigging rod 36 to 42 inches and a small Ratso in black, red or purple jigged right under the top of the ice can be just the ticket for whopper crappie!

Get out there with the ice anglers

If you are chomping at the bit to go ice fishing right now, try out some small channels and backwaters. They will freeze earlier than the main lake and can produce some great panfishing!

Shop here for the lures mentioned in this article or here to get an all new 2020 Custom Jigs & Spins catalog.