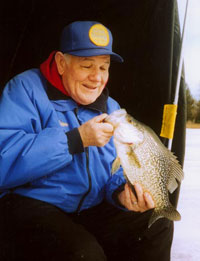 Poppee set the hook and the Finesse Spring Rod seemed to break in half. The 1-1/2 pound test held even though the line was rubbing on the ice edge. "I-YEEEE,” he yelled out. This fish was bigger than the previous half dozen ‘gills that we had just caught. She came up to the hole and I realized it was one of those giant pumpkinseeds that Lake Geneva was noted for.

"That bluegill is a pumpkinseed?"

"No, that pumpkinseed is a Pumpkinseed."

"Then what is the bluegill?"

"Just forget it and go back to fishing, Poppee.”

You don’t catch big fish by accident (well maybe I do), and you don’t catch lots of big fish by accident (well Poppee always does). But, to be successful in ice fishing, like any sport, you need to put the odds in your favor. The way you do this is to be prepared. In the early season preparation is key since the ice isn’t very thick and you need to travel light, so take along minimal gear. Let’s take a look at some early season ice gear you need and how to use it.

When you head out on early ice it is best to use a spud bar, which you slam into ice in front of you to make sure your path is safe. While three inches of ice is recommended for safe walking travel, I’ve fished on some very thin ice that I knew was safe, because of the spud bar. I’ve also found four-inch ice to be unsafe, during warm conditions. 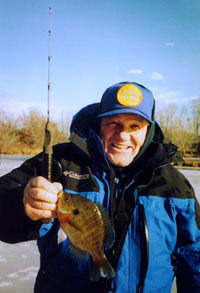 Early season panfish ice jigs consist of Custom Jigs & Spins Rat Finkees, Demons, Ratsos, Purests, Nuclear Ants and Diamond Jigs and ‘Gill Pills. Since early season bluegill and crappie can usually be caught in very shallow water, like that found in channels or weedy bays which freeze first, weeds and wood are key structures to focus your efforts on. Crappie tend to use wood a little more than the bluegill and sit higher in the water column, meaning that you will catch crappie from halfway down to right up under the ice. Bluegill tend to feed more near the bottom.

I like using small jigs with size 16, 14, 12 and 10 hooks. Custom Jigs & Spins Diamond Jigs and the ‘Gill Pills are good early season jigs since they are tiny and colorful.

The Diamond Jig is a jig that likes to be pounded. By this I mean jig or pound it really quick. With this quick motion, the Diamond Jig moves and dances, enticing fish to strike.

The ‘Gill Pill has a flat nose so it has more of a darting and diving action as you jig it. On both of these jigs the hook rides up at a 30 degree angle. This gives you better hooking power.

The ‘Gill Pill and Diamond are also good when fish bury themselves in the weeds. Most anglers pass these fish by since they only fish the tops of the weeds or the weed edges, passing the thick ones by. Under cold front conditions (yes cold fronts even affect fish under the ice), panfish and bluegill in particular, bury or hunker down in the weeds. If you can get a small jig to "pound through" by jigging and letting out line till your jig gets near bottom, you will catch these untapped fish. I’ve caught fish in three feet of water that had weeds all the way up to the hole. So when the going gets tough, try a tough spot.

Rat Finkees, Ratsos and Shrimpos are other jigs to try in these weedy circumstances. Their heavy heads will pound through the thick weeds also. A Rat Finkee should be used with spikes or a waxworm. Live bait can be added to the Ratso and Shrimpo, but they can also be used as-is, without bait. The Shrimpo is rather unique in that it rides vertically, but the Finesse Plastic tail rides out horizontally and attracts. 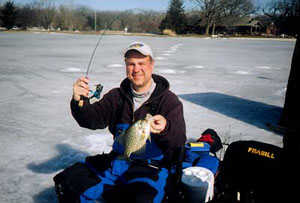 While most early ice anglers prefer to drag as little as possible on early ice, I still like to bring a portable shelter. I like a lightweight one-man flip-over Shelter to haul in my gear and sit in when I’m on the ice. The flip-top design of the Solo allows you to move from spot to spot quickly and the black fabric lets you see down the hole and watch the action.

Early ice is one of the best times of the entire year to catch panfish. Try some of the gear and techniques I’ve discussed and you’ll be amazed at how good of a ice fisherman you can be.

If you enjoyed this article, you may also like
×