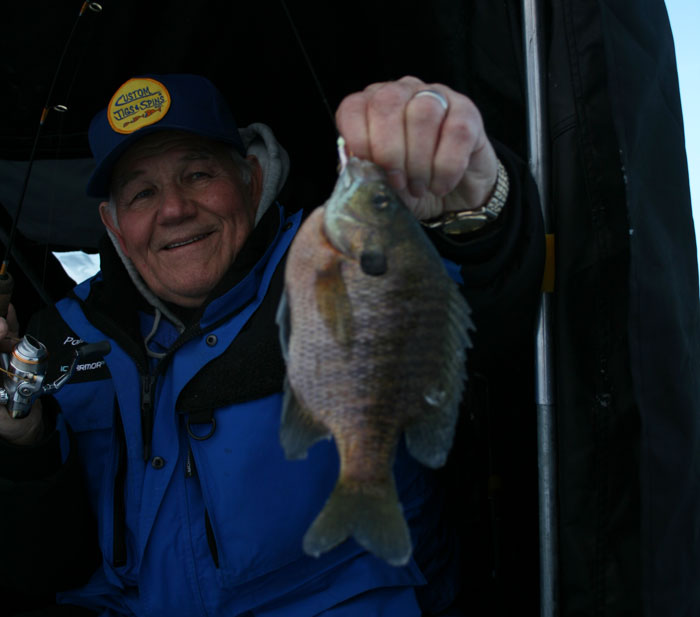 Poppee always fished way different than me. I was always, thinking, drilling, grabbing a different rod and generally panicking that if the fish weren't gonna bite soon, it would be a tough day and THEN WE WOULD HAVE TO FACE MY MOM WITHOUT FISH FOR THE FRYER!

Poppee would just be sitting there, seemingly doing nothing, almost mocking me and my efforts. He'd be drinking coffee, eating cookies, dozing off...then his rod would buckle and a fish would pop out his hole. That's why he was Poppee, always popping fish!

We’re one of the first to make glow jigs

Back in 1989 In-Fisherman wrote a feature article on the effectiveness of glow lures for ice fishing and they focused on our small company; Custom Jigs & Spins. We were one of the few manufacturers that had figured out how to paint glow ice lures effectively and after that article hit, the word got out and our sales skyrocketed!

Flash forward to thirty years later and now every manufacturer has glow jigs and spoons. Patents are useless in the fishing industry, every manufacturer copies each other and there is no honor among thieves...but enough about that!

Glow ice jigs and spoons are so effective that a lot of the time I wouldn’t think of fishing with anything else! Live bait can’t take the place of a glowing jig or some glowing soft plastics.

Darkness makes nocturnal predators more susceptible to glow lure presentations. Plus, there are less anglers fishing at night...so more fish for me! Walleye, crappie and perch feed at all hours, you can catch them during daylight hours, but best times to focus on are dawn, dusk and nighttime. 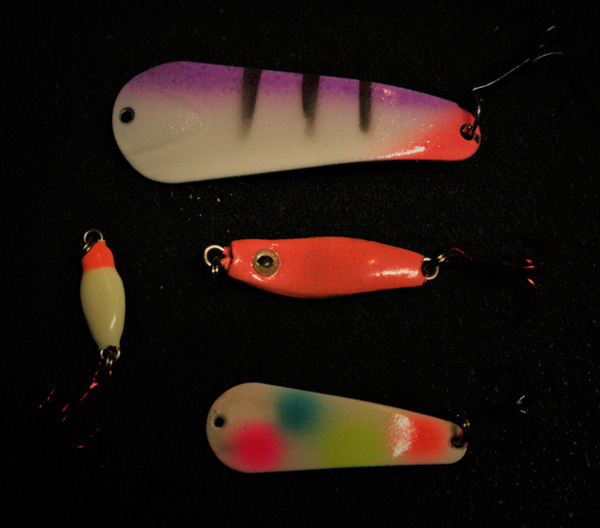 Getting out on the ice to fish

In fertile stained lakes, fish will push shallow. Three to twelve foot depths are ideal to focus on and that is where to start drilling. I like to drill sets of holes that our group can fish for a while and then move the tent to a different set after giving each series a thirty minute effort.

Points, reefs and flats areas are prime spots to check, basically some of the same water that you can catch fish in the early spring is worth a try in winter too. Keep commotion to a minimum and try to stay away from other noisy anglers. Easier said than done!

If possible arrive a few hours early before prime time so that you can be all set up when then bite is on. Then drill your holes, set up the tent, fire up the locators and get ready. I like to set up in the middle group of holes, that way I can always move shallow or deep depending on how things play out. Meaning, I’ll drill some holes in three feet, six feet, ten feet and twelve feet. If I set up tip-ups we’ll set them in the shallowest holes.

The tip-ups I prefer are the Frabill Pro Thermal Series. These 10" round black tip-ups are insulated and come with everything you need to start fishing; if you get the Pro combo pack. (Line, hook, depth weight and bobber as well as a tip up light). Too bad they couldn’t figure out how to get a few live minnows in the package too!

I've used these same tip-ups for more than 15 years (I think that I replaced the line once, LOL). I like to set the hook to within six inches off bottom, right in the walleye zone. Most anglers have a tendency to set a tip-up and then leave it alone for hours. I prefer the 20 minute rule, if nothing happens in 20 minutes, check it and then move the tip-up to another hole. You just drilled all those holes, you might as well use them! 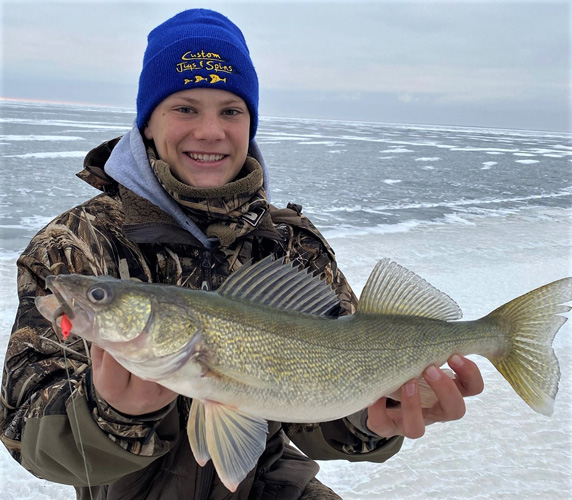 Setting up a dead stick

I also run dead stick rods set to six inches off bottom also. A dead stick is a soft action rod set in the holder and baited up with the drag set loose. I put on a dorsal hooked minnow on a size 4 Custom Jigs & Spins Mega-Glow Red Demon for walleye or a size 6 Demon for perch and crappie.

The key is to reel it up and recharge it every ten minutes. What’s the use of using a glow jig without keeping it charged up? I use Custom Jigs & Spins purple UV Nuclear Flash to charge them, it's my secret weapon!

Some guys use flashlights, camera flashes or the lantern to charge their glow jigs. I prefer Custom Jigs & Spins purple UV Nuclear Flash. A purple UV light really gets these jigs to power up.

Some lakes/states allow three rods per person while others allow two or even just one. I always actively jig, then will add the dead stick and finally if allowed, set tip-ups. The dead stick is within grabbing distance, while the tip-ups are set shallower further away.

Here’s what I use

When I am actively jigging, I focus on three types of glow lures. The Custom Jigs & Spins Demon Jigging Spoon, the Glow Slender Spoon and a tungsten jig like the NEW Tütso. These three lures offer three totally different presentations that will surely tempt a few fish!

You can jig the Demon Jigging Spoon with one foot sweeps of the rod or a little jiggle. The jiggle is the key. If you use electronics and a fish moves in and stares the spoon down, it’s that jiggle that gets them to bite. There are 10 glow colors available including glow red, which is best in stained water and glow blue, which is hot in clear water. 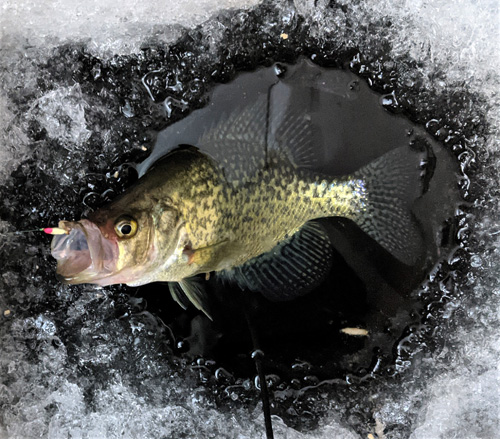 Next up is the Slender Spoon. This jigging spoon is for the more aggressive fish and I like to use it in conjunction with the Demon for two different presentations. I'll work this spoon with aggressive sweeps and twitches and if a big walleye doesn’t smack it, then out it comes and down goes the Demon.

The Slender Spoon comes in four sizes and two glow finishes and the Pro Glow Slender Spoon is available in nine glow colors with either a nickel or gold spoon back. That's 80 glow size and color combos for Slender Spoons, you are going to need a bigger tackle box! 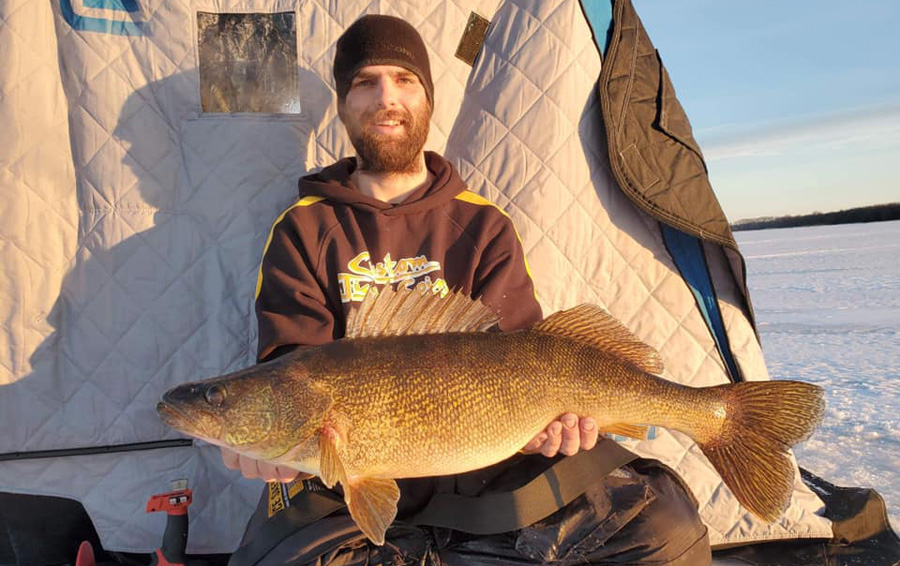 Finally, the New Tütso is a compact, heavy jig for its size being that it’s made from tungsten. I like to tip it with a fathead or shiner minnow. Pounding this jig on bottom works well, especially on gravel bars. Top colors are wonderglow, pink glow and lemonade glow. Size 6 is great for walleye and perch, while those less aggressive fish will hit the size 8.

If you plan on doing some ice fishing this winter, be prepared, set up early and try out some of the products and ideas I’ve suggested. You’ll be surprised at the results!

Then show off our catch on our Facebook or Instagram pages. We love to see big fish!

If you enjoyed this article, you will also like these: